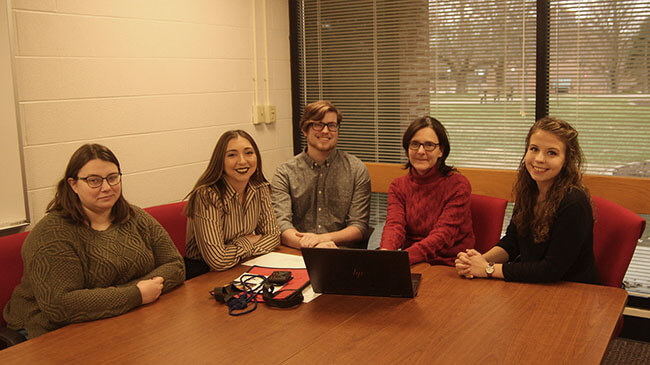 This article was originally published on the Indiana University Southeast website.

Scott County, Indiana, has one of the highest per capita rates of opioid addiction in the United States.

The Centers for Disease Control (CDC) rank it as the 32nd most vulnerable county in America–out of a total of 3,142–placing it in the top one percent.

For one group of committed teenagers, statistics like these are more than numbers, they are the lives of family, friends, neighbors, classmates.

Since 2018, the members of EMPOWER, a youth-directed, Drug-Free Communities-supported coalition of students from two school districts in Scott County, have worked to create and maintain a safe, healthy and drug-free community.

To help the members of EMPOWER develop strategies and tools to advance their efforts, students from the IU Southeast chapter of the Public Relations Student Society of America (PRSSA) have been conducting workshops in social media campaigning and other aspects of public relations.

The relationship with IU Southeast began when the Scott County substance abuse prevention coalition (CEASe) received a federal grant from the Drug-Free Communities Support Program (DFC) to enable EMPOWER to build and execute a social media campaign highlighting the impact of alcohol use on adolescent brain development, as well as connecting youth alcohol use to increased risk for poor health outcomes and substance use disorder.

Lori Croasdell, CEASe and Drug-Free Communities coordinator, reached out to Dr. Melissa Fry, professor of sociology and director of the IU Southeast Applied Research and Education Center (AREC), who in turn facilitated contact to Dr. Jane Dailey, assistant professor of public relations and faculty advisor to the IU Southeast chapter of the Public Relations Student Society of America (PRSSA). The members of the PRSSA were enthusiastic about applying their own burgeoning expertise to a real world project, and began conducting workshops in social media campaigning and other aspects of public relations with their new partners at EMPOWER